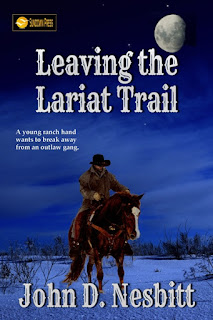 A young cowhand, Charles Landon, wants to go straight and break free from a crooked gang, but it won’t be easy. When his former associates hatch a plan to rustle cattle, Charles decides to move on—and the old gang members don’t believe he can be trusted.
As they begin to come after him one by one, he realizes he’s going to need to carry a gun—it’s the only way he can get out of LEAVING THE LARIAT TRAIL alive!

Fred and Burke were quiet and heavy-lidded as they sat in the two chairs by the stove. The whiskey bottle was empty, and a cloud of tobacco smoke hung in the air. I found that the sewing went just as well at the table as it did in my lap, so I didn’t mind sitting by myself. Furthermore, I had things to mull over.
Of the dozens of comments that had been tossed off during the visit, Ace Martin’s statement, not even a boast, that he had shot cows and left them was a remark that I kept coming back to. I had heard of killing a mama cow in order to make off with her unbranded calf, but I had never heard a man say he had done it, much less in such a matter-of-fact tone. I had already decided I didn’t want to take part in this new plan, and now I was even more certain. I did not want to work with Ace Martin.

Posted by Livia J Washburn at 1:00 AM

Sundown Press, launched in December 2014, publishes fiction and non-fiction of all lengths, from familiar authors as well as new talent. Genres include reference books, biographies, and fiction based on real-life characters.

After founding the historical western/western romance publishing company Prairie Rose Publications in August 2013, Livia J. Washburn and Cheryl Pierson recognized a need for an imprint specializing in fiction and non-fiction written by both women and men for readers across the spectrum. Sundown Press was born.

Got a book you’d like to submit? Sundown Press accepts submissions for how-to books, cookbooks, and other non-fiction works of all lengths. If you feel your manuscript fits the submission guidelines, please email it, along with a query and synopsis, to Editor in Chief Cheryl Pierson at prairierosepublications@yahoo.com.

We look forward to taking a look at your work. 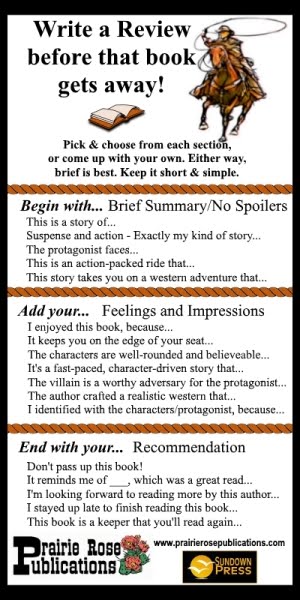